In 1998, the Canadian Forces Base (CFB) Chilliwack closed its 400-acre site in Chilliwack. The CFB Chilliwack was selected for closure as part of the reduction of the Canadian Forces and its role was minimized to an Area Support Unit to support Regular and Reserve units in mainland BC. The Area Support Unit was also closed in 2013. During its lifetime, the CFB was the area’s second highest employer and also provided vital support to local communities in times of crisis or difficulties.

The void left by the former CFB was further emphasized when all of Chilliwack’s food processing plants, which employed hundreds of people, left at the same time. Compounding the urgency to draw up a blueprint for the city’s economic future was the fact that the University (College) of the Fraser Valley was rapidly expanding to capacity on its 27-acre Chilliwack campus. 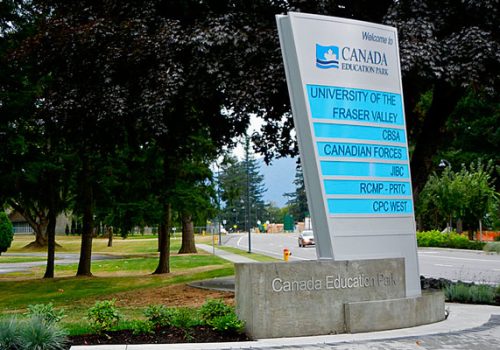 In 2003, the City of Chilliwack, the Chilliwack Economic Partners Corporation (CEPCO), Canada Lands Company, and additional partners signed a memorandum of understanding to officially launch the Canada Education Park project. Over the last 13 years, the Park has unfolded on 200 acres of the former Canadian Forces Base, adjacent to the Vedder River (400 acres total of institutional, commercial and residential development, including Garrison Crossing).

The Canada Education Park is a multi-agency educational partnership that brings together some of the nation’s most respected education, training and research facilities including the University of the Fraser Valley (UFV), the Royal Canadian Mounted Police Pacific Region Training Centre (RCMP PRTC), the Justice Institute of British Columbia (JIBC), Canada Border Services Agency (CBSA), the City of Chilliwack, Canada Lands Company and the Chilliwack Economic Partners Corporation.

CEPCO continues to be the lead agency involved in the development of Canada Education Park.

The Chilliwack Economic Partners Corporation received the Stan Rogers Memorial Award at the 2016 BC Economic Development Awards Banquet. This award recognizes the leading role CEPCO has had in the ongoing development of Canada Education Park.

The purpose of this dynamic and innovative partnership-based project is to provide a sustainable economic base for the community of Chilliwack in the critically important and growing knowledge-based sector.

The development of the Canada Education Park has resulted in state-of-the-art training facilities for all of the partners involved, including the University of the Fraser Valley campus, the RCMP Pacific Region Training Centre, Canada Border Services Agency and the Justice Institute of British Columbia.

Currently, the City receives approximately $3,411,000 in municipal taxes/payments in lieu of taxes for the area of Canada Education Park and Garrison Crossing. In 2003, the City received $807,000 in payments in lieu of taxes. (Please note that both of these figures include the municipality portion only, and do not include other government taxes such as school tax, hospital, etc.).

University of the Fraser Valley (UFV)

The University of the Fraser Valley relocated its entire campus from Yale Road to Canada Education Park, which enabled them to significantly expand the campus in Chilliwack. This provided the basis for UFV to expand its degree and transfer programs, as well as applied technology diploma programs.

In April of 2009, the federal and provincial governments invested an additional $7.2M for infrastructure improvements, followed by $10M from the province in 2010, preparing the way for the campus relocation to Canada Education Park in 2012.

The new Canada Education Park campus of the University of the Fraser Valley rose above the international competition to be named “Best in Class: University Building” by the World Architecture News (WAN) Education Awards in 2013.

The RCMP PRTC occupies 60 acres at Canada Education Park and carries one of the most significant student bases. One of the buildings occupied by the RCMP underwent significant improvements in the $700,000 to $800,000 range. The PRTC offers advanced training to existing RCMP members from Manitoba to Vancouver Island. The RCMP PRTC recently completed construction of its state-of-the-art indoor firing range at a cost of $13M (federal dollars). The firing range project was managed by CEPCO.

The Justice Institute of British Columbia has had a campus at Canada Education Park site since 2003. JIBC purchased 6.1 acres and completed significant renovations to CFB building 1079.

JIBC is a provincial institute with a specific mandate to provide learning opportunities in justice, public safety and related human services. JIBC plans to expand its programming in Chilliwack to include police training, Indigenous leadership and career preparation, emergency management, advanced care paramedics and conflict resolution. JIBC also provides training to a number of international organizations on a contract basis.

CBSA currently provides duty firearms training, control and defense techniques, transport and control training, passenger motor vehicle training, and phase three of basic recruit training for new border services officers. CBSA recently moved into a newly renovated building that allows all of their training under the same roof. Renovations were managed by CEPCO and completed at a cost of over $3M. 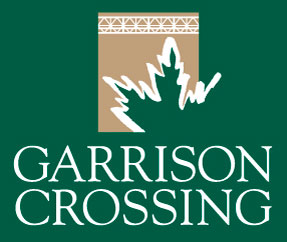 The development at Canada Education Park has provided institutional facilities that expand and enhance the skills in the local labour force, created new opportunities for attracting students and families to our community, created new jobs, and contributed to the overall economic growth in Chilliwack.

The infrastructure improvements completed at Canada Education Park and Garrison Crossing have contributed to make the area a complete neighbourhood:

What used to be characterized as a farming community with a strong military presence has evolved into one of the top education hubs in Canada, making the opportunities for students, entrepreneurs and residents more diverse than ever.

The Canada Education Park project has proven to be an innovative way to bring economic development and sustainability to Chilliwack.

The Park has created community benefits and recreation resources through well-planned development. The Trans Canada Trail along the Vedder River, the linkage with the Garrison Crossing Legacy Trail, the east-west pedestrian spine, and the Cheam Leisure Centre in Garrison Crossing offer excellent opportunities to create a comprehensive pathway and recreation network through the Vedder Crossing area.

The Canada Education Park was developed on an environmentally sustainable basis, by reusing and refurbishing existing improvements when it was possible to do so; encouraging pedestrian and bicycle access with the Park and the use of public transportation and bicycles to and from the Park; promoting energy efficiency, recycling, energy efficient construction and development standards (LEED); and other programs and initiatives which reduce the environmental impact of their respective activities within the Park.

Canada Education Park is a strong example of the benefits of positive public/private partnerships between the federal, provincial, and municipal governments, federal and provincial institutions, and the university. Given the need for trades training and innovation, Canada Education Park has become a strong centre of resource development in our community.

The Vedder River Rotary Trail was a joint venture with the Rotary Club of Chilliwack, the Canadian Forces Base of Chilliwack and the City of Chilliwack. This beautiful trail runs along the Vedder River and is 15 km long. Great for running, biking, walking and horseback riding, many outdoor enthusiasts find this trail wonderful not only for the scenery but for the great accessibility to the Vedder River.

Numerous pedestrian trails link down to the Trans Canada Trail along the Vedder River. The Legacy Trail links north to Garrison Crossing and complements a major east-west central boulevard. Significant trees, landscape features, and heritage buildings have been retained as part of redevelopment. On the east side of the campus, conveniently located cafes and supportive local commercial uses are tucked under upper storey residential uses along the south part of Vedder Road, and more commercial uses are concentrated at the corner of Vedder Road and Keith Wilson Road.

Canada Education Park has preserved the historic integrity of the former Canada Forces Base Chilliwack. The military heritage of the lands comprising the Park is honoured by preserving existing street names, elements of the existing buildings, landmarks, legacy markers and monuments, and landscape features.