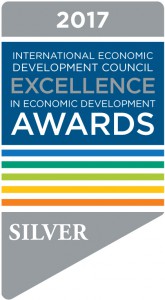 The honor was presented at an awards ceremony during the IEDC Annual Conference, which was held September 17 – 20, in Toronto.

“On behalf of the IEDC board of directors and Excellence in Economic Development Awards Advisory Committee, congratulations to the Chilliwack Economic Partners Corporation. Not only did they work to provide a necessary service to their community; but also, their participation in the awards program sheds light on their stellar projects which other communities can now use as a benchmark.” – Michael Langley, FM, CEO of GREATER MSP, Minneapolis–St. Paul, MN, and 2017 IEDC Board Chair.

CEPCO is responsible for attracting and facilitating economic growth for the city of Chilliwack, and is the lead agency involved in the development of the Canada Education Park. Over the last 13 years, Canada Education Park has unfolded on 200 acres of the former Canadian Forces Base Chilliwack that was closed by the federal government in 1997.

The real estate and infrastructure improvements and new commercial and residential developments at both Canada Education Park and Garrison Crossing have resulted in a complete and sustainable neighbourhood that minimizes the impacts of redevelopment, while retaining and celebrating the military legacy.

The Canada Education Park is a multi-agency educational partnership that brings together respected education, training and research facilities, including the University of the Fraser Valley, the Royal Canadian Mounted Police Pacific Region Training Centre, the Justice Institute of British Columbia, and the Canada Border Services Agency, all representing close to 13,000 students and trainees on campus each year.

The innovative development contributes significantly to the overall economic growth in Chilliwack and has resulted in state-of-the-art training facilities that expand and enhance skills in the local labour force, attracts students and families to the community, and created over 470 jobs on site.

“The awards process is a thorough, non-biased and multi-layered process. These are extraordinary accomplishments for all winners, and an overall great effort by all participants. We look forward to next year’s awards competition,” Langley said.

About the International Economic Development Council

The International Economic Development Council (IEDC) is a non-profit membership organization serving economic developers. With more than 5,000 members, IEDC is the largest organization of its kind. Economic developers promote economic well-being and quality of life for their communities, by creating, retaining and expanding jobs that facilitate growth, enhance wealth and provide a stable tax base. From public to private, rural to urban and local to international, IEDC’s members are engaged in the full range of economic development experience. Given the breadth of economic development work, our members are employed in a wide variety of settings including local, state, provincial and federal governments, public-private partnerships, chambers of commerce, universities and a variety of other institutions. Among many activities which benefit the economy, IEDC’s members create high-quality jobs and develop vibrant communities. www.iedcONLINE.org.